These days, now that I have my own children, I have to be quite a bit less shy.  I have to actually speak to people and put myself in uncomfortable situations at times.  It’s been hard for me to manage this over the years, but I like to think I’m doing okay now.  I’m sure people still think I’m quiet, awkward, and unable to open up and just say something interesting for once, but I do have my good days.

Now that we’ve settled into school for a couple of years now, I have fallen in with a lovely group of moms.  They often meet up after school dropoff for a morning coffee, which is just my kind of style.  This is a new experience for me, as I haven’t formed such close relationships with other moms.  I feel like I rarely have even spoken like an adult since my first child was born, let alone even speak to group of adults gathered around a table in a cafe.  I’m very happy when I’m with them and consider myself lucky to have such great company.  Yes, I’m still the one that doesn’t talk much and sometimes awkwardly stumbles on what I’m trying to say, but I’m trying to just relax, enjoy where I am and have a good time.

Sometimes I’ll take something or other that I’ve baked for the “coffee mums” (as my children call them!) to try out.  They tried my rum & tonka bean dark chocolate truffles and some homemade Larabars.  Last week, I took some homemade Biscoff spread for them to try. A friend of mine had shown me a recipe to make Biscoff spread at home.  Since Biscoff spread has yet to become popular in Australia, I decided this is a recipe I should become familiar with.

The recipe is very simple and includes a package of Biscoff biscuits, a little bit of brown sugar, coconut milk, butter (or coconut oil), lemon juice (to brighten the flavor) and a touch of cinnamon.  The ingredients are tossed into a blender, and you end up with a delicious, creamy Biscoff spread to use as a fruit dip, or drizzling on ice cream or pancakes, or however you like.

So I made the recipe and was quite impressed with the results.  It wasn’t exactly the same, of course, but good enough.  I felt that the deep caramel flavor of the biscuits were more mellow than I liked, and the taste of the coconut milk came through.  So my friend suggested trying evaporated milk instead of the coconut milk. 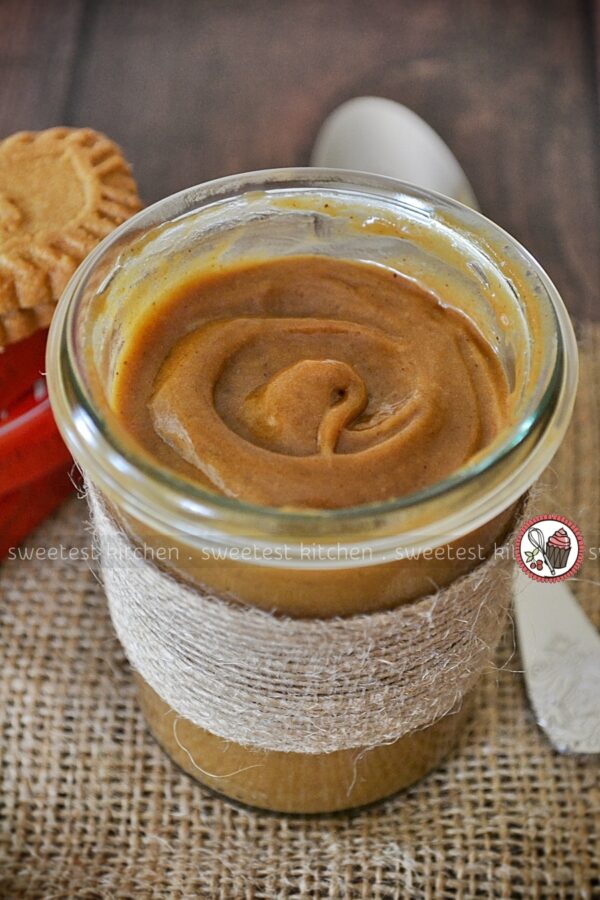 And this is where the “coffee mums” came in.  I took a jar of each for them to taste test.  This was really helpful in determining the winning recipe, despite the results ending with a tie!  Two moms agreed that the evaporated milk recipe allowed more of the caramel/gingerbread to come through; one mom loves coconut, so she preferred the taste of the coconut milk one; the other mom just simply preferred the coconut one.  When I added my opinion to the results, however, the evaporated milk recipe won.

However, if you’re a vegan, or just simply aren’t into dairy, switch out the evaporated milk for the coconut milk and replace the butter with coconut oil.  Biscoff biscuits are vegan as well, so consider yourself a very lucky vegan! The spread featured in the photos above was made using coconut milk.

I’ve been a bit absent from the blog lately, and probably a bit out of practice since my last post.  As the 6-week school holiday has ended and my children are back at school, I intend to get back to work here with more frequent posts and recipes.  Let me know if there’s any particular recipe you’d like to see me try out to mark my return to blogging! 🙂 Having trouble finding Biscoff biscuits, fellow Aussies? Try looking in the biscuit aisle at Coles; they're in a tiny red and white packet and are called Lotus biscuits. They're less than $2 and you get exactly 124g - perfect for this recipe.
3.2.2925

If you enjoyed this recipe, please leave a comment, hit up one of those stars to rate it, and be sure to tag any photos with #sweetestkitchen on Instagram if you made this recipe! I'd love to see what you've created!
Previous Post: « Rum & Tonka Bean Dark Chocolate Truffles
Next Post: Hazelnut Espresso Panna Cotta »